He says it is due to an unforeseen market change and it is critical – so much so that the project will be worthless if it is not received by the new deadline. The project manager knows that meeting this new deadline will be particularly challenging due to some personal vacations and training plans that her project team members already have planned during this timeframe.  What does the project manager do in this situation?

This has shaken her confidence.  What is making them change their attitude at the end? When she asks them this, they say they must have been unhappy the whole time, but just didn’t communicate it. Why can’t stakeholders be trusted for honest feedback during the project? Is this a normal problem for other project managers? Why are stakeholders doing this?

What Project Management Tools & Techniques Should be Used?

You have to move quickly, which you can do if you understand the sponsor’s priorities and the project’s critical path. You need to quickly find the answers to a few key questions: Is there a financial reserve you can use for schedule crashing? Is there a possibility that the employees can be given extra vacation days for shifting their planned vacations? Is the planned training something that must happen during this time, or can it be postponed? What other internal and external resources might be able to help finish the work?

These are the tools and techniques that are most important:

Take a Look at Our Course Catalog

“Todd Williams knows a lot about getting failing projects back on track. His Filling Execution Gaps provides a thorough roadmap for initiating projects well and ensuring their progress toward successful completion. The focus of the book on organizational factors makes it a good reference for leaders at all levels, particularly at the upper levels where actions and decisions have such a significant impact – for better or for worse – on project outcomes.” Tom Kendrick Program Director, Pr…

“Todd provides the right guidance on how to establish an effective change management organization. This is a must read before undertaking of your next organizational project, as it will help you avoid many pitfalls which drive delays or project failures.” John T. Lenga, Jr. CEO, Head Business Group North America Autoneum North America, Inc. 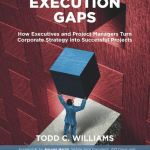 “The instructor was very enthusiastic and knowledgeable about the subject matter. She kept the class interesting and brought up good examples. The risk plan analysis and the concept of negative stakeholders was most helpful.”

“this is a Great deal with a GREAT teacher”